Along with the golf course, the Folds of Honor Memorial Wall opened. It features 8-foot tall concrete walls, and as golfers and guests enter the grounds they will walk in the boot prints cast in bronze of soldiers killed in action. "We are grateful to the Dick & Betsy DeVos Family Foundation and others who sponsored the Memorial," said Folds of Honor founder and CEO Lt Col Dan Rooney.

Every day at 1:00 PM, or 1300 hours, golf will pause for the playing of "Taps" and a bell will ring 13 times, signifying the 13 folds that bring the flag to its triangle shape.
There will be plaques at every hole, honoring Nicklaus' record 18 professional major championship victories, accompanied by a story of a fallen military member.

American Dunes represents the vision and collaboration of Lt Col Rooney and Nicklaus, who, along with his legendary firm, Nicklaus Design, donated his design services to support the American Dunes mission. Following Nicklaus' lead, 18 individuals sponsored holes and four partners made the project possible. Folds of Honor contributed no funds for construction or operations at American Dunes.

The course is a tribute to the military and to the birthplace of Folds of Honor, a foundation that provides educational scholarships to spouses and children of America's deceased or disabled service members. It was on a flight for Rooney in 2007 from Chicago to Grand Rapids with a fallen service member aboard, that the idea of Folds of Honor was born. Since its inception, Folds of Honor has provided over 29,000 scholarships worth about $145 million. Among the students served, 41 percent are minorities. Annual profits from the golf course will benefit the organization. Active military members and veterans will receive a discount for golf at the public facility.

Lt Col Rooney met with Nicklaus in February 2018 to discuss his vision for American Dunes, and the Golden Bear was quick to come on board. Construction of American Dunes began in March 2019. It is a complete redesign and reimagination of Grand Haven Golf Club, which opened in 1965 and closed in 2018. At one time, Grand Haven was on Golf Digest's list of "America's 100 Greatest Golf Courses."

Folds of Honor was founded in 2007, the same year Grand Haven hosted the first Patriot Golf Days. Since then, the yearly event has provided over 10,000 scholarships worth $50 million. In 2020, Folds of Honor joined with the PGA of America for Patriot Golf Days, and this year it moves to Memorial Day weekend.
The former tree-lined facility, which is located a few hundred yards from the east shore of Lake Michigan, is now a dunes-like course, utilizing the dramatic local topography and sand base that coversthe property. There are 30 bunkers, and sand dunes are located either right, left or in front of the player at each hole.

"I love the game of golf, but I love my country even more," Nicklaus said when describing his and his world-leading design group's participation in American Dunes. "This is a course designed with a purpose, with a great cause in mind and at heart."

"The best projects are when the owners or developers are hands-on and passionately involved," Nicklaus added. "Lt Col Dan loves his country, the military, the families positively impacted by Folds of Honor, and he loves the game of golf. Combine that and Dan is very passionate about American Dunes, as am I.

"I think we have produced a spectacular golf course. We have utilized and maximized the natural sand dunes we uncovered, and at the same time, we retained areas of beautiful trees. Playing through and around exposed dunes, as well as tree-lined holes in some places, creates a very special playing experience. Designing something this special is very rewarding, but more important is the way American Dunes can and will help support our military and their families. It's been fun to work with Dan, and to meet the Founders and other people who have joined this mission. They are patriots who believe in Folds of Honor and the impact it continues to have on tens of thousands."

The course has five sets of tees, plays to a par 72 (36-36), and measures 7,213 yards. It has rolling and generous fairways, and Nicklaus believes it has the look and feel of a golf course that has been there for decades.

"When we were discussing the project, Mr. Nicklaus said, 'Dan, if we are going to call this place American Dunes, we've got to uncover the dunes,' " said Lt Col Rooney.
"I'm thrilled, humbled and proud the dream of American Dunes is now realized," he added. "It's a significant day in Folds of Honor's history. I'm grateful to Jack and his team for their incredible work. American Dunes never happens without the great patriots that stepped up to sponsor the project.

"American Dunes commemorates the birthplace of Folds of Honor and is the culmination of the work and dreams of so many people. It's Barbara and Jack believing in our objective and partnering with us; it's the individuals who stepped up and made a financial commitment; and it's all those who understand the importance of what we're doing. Our mission is to provide golf's most patriotic experience, give back to our military families, and inspire our guests to join the Folds of Honor Squadron."

The Camp at American Dunes, scheduled to open summer of 2022, will provide on-site accommodations for members and guests. It is a 16-room lodge that features 12 staterooms on the upper level and four suites on the lower level. A gathering area, known as The Bunker, is located on the lower level. It features a full bar, pool table, Golden Tee arcade game, and multiple televisions. The Camp is located near the clubhouse patio, and firepits are available each evening. At the aviation-themed CAVU Squadron Bar, located in the clubhouse, the draft beer system is incorporated into an Aim-9 missile that travels nearly 2,000 miles per hour, costs $400,000 and has 270 confirmed air-to-air kills. 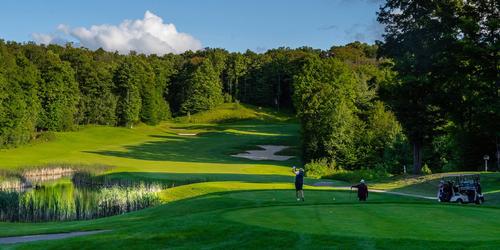 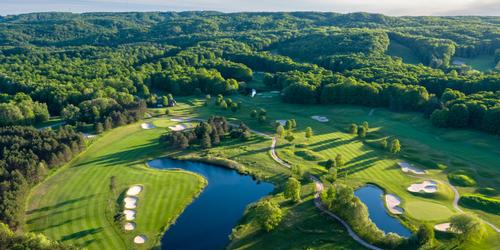 BOYNE Golf: The History of Donald Ross Continues to Shine in Northern Michigan 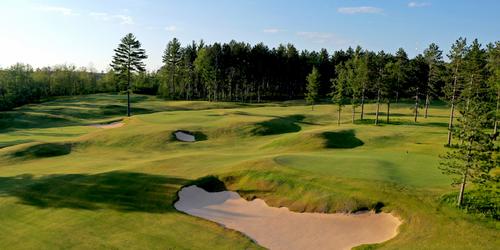 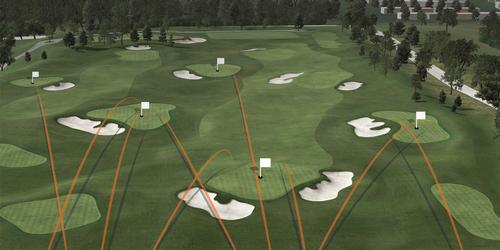